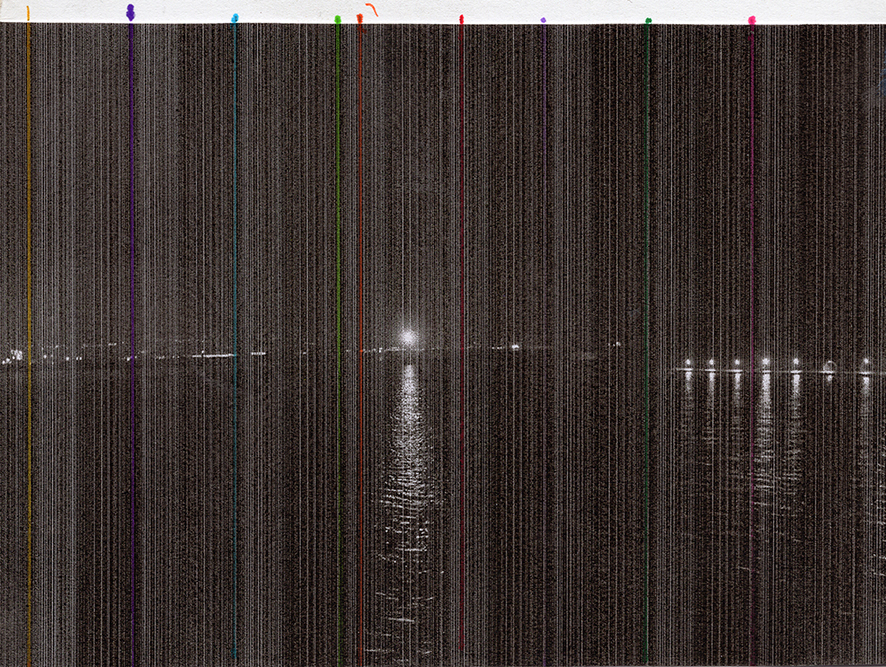 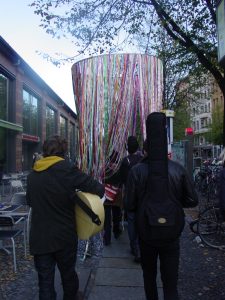 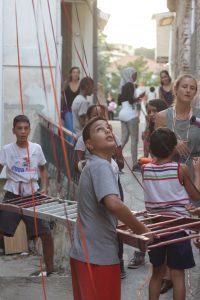 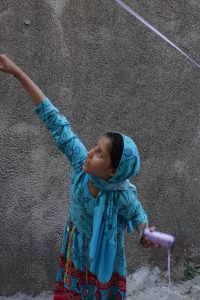 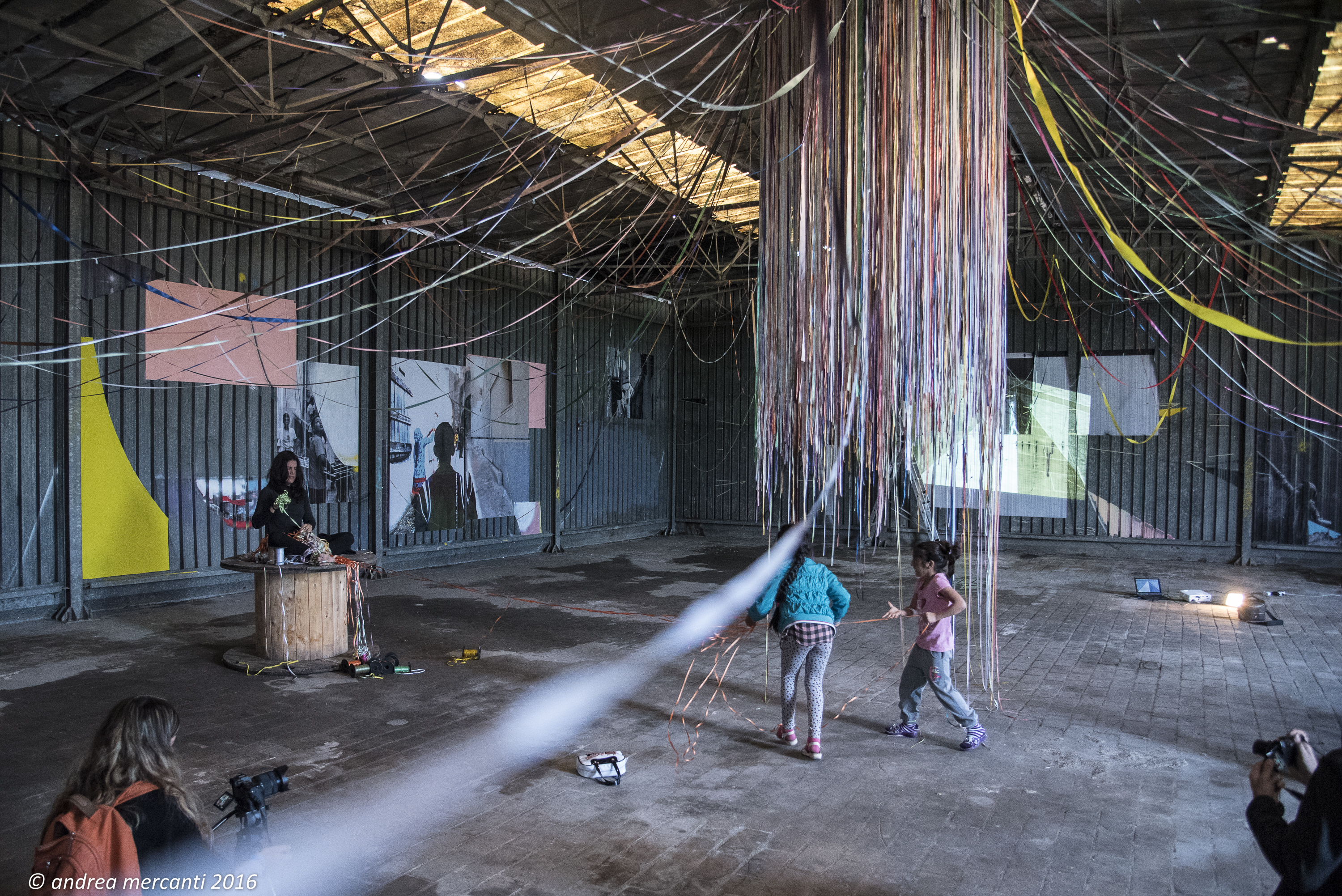 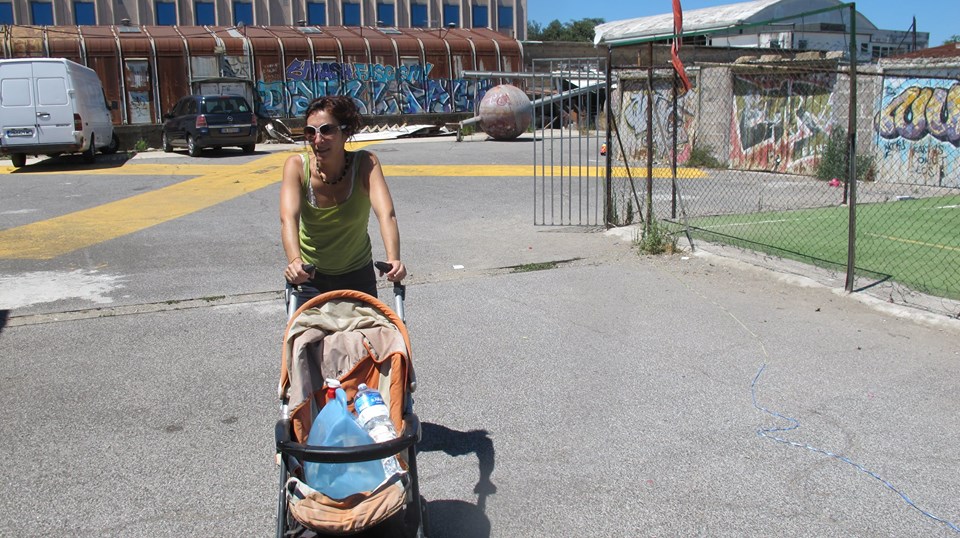 In 2011 I started going to the street with my drawings, gestures,colours …I started doing interventions, organising actions. I was looking for an idea of community I could walk with, participate to and move with..the art world was never and now less then ever, as a single mother with a child, a place for my art….it started as a simple move towards..searching for a new possibility for me and my new born child, to live my art out of the studio space, inhabit it and continue my research.

La Tenda_  is what came out of this experience and what I understood since then.

La Tenda_/The Tent_ became an attempt to create an extensible, transportable, colourfull (and with coloufull I mean all visible colour spectrum, since no colour can be excluded) open place that would ignore the given barriers, a place to meet and act together. An ideal place for a new born person.

The territory we move in is made of barriers and frontiers.

My attempt is to visualise and share another idea of space and thatfore I refer to concepts like horizont, coordinates, merdians..believing that the world has been colonialized and the earth has to be understood again. My attempt is to work on these coordinates, new meridians and horizont and built them new, visualize them. I believe that they are made out of connection, encounters, and my aim has been to get prepared to live those moments, build up the conditions to keep them safe, to make them real. And build a place to celebrate them.

The Tent_  became more then an object or a project, a symbol for a behaviour, a sort of attitude to dress up (Veste: in italian garment, clothing but also role) that much relates to the body capacity to adhere to a present necessity knowing  that there is no place untill we don’t built it up again. Facing a fragile condition, facing abandon, confronting with the potetial of beeing just a body between others in the same conditions. The Tent_ was built by drawing, throwing, jumping, looking in another eyes.

My interest in joining communities, projects that are dealing with the potential of bodies that already inhabit this possibility.

Some details steps and details about my practice

The first time the Tend was brought to the street was to participate to United for Global Chance the demonstration of Occupy Wall Street in Berlin in 2011 („we are the 99%“). I walked 15 km from my house to Mariannenplatz and back to Gallery Franzotti in Xberg where the Tent was installed during the opening

The next time the Tent became the place where to meet the community of Citta’ Futura in Riace, a new multicultural community growing in this little town in South Italy. g since 2009, when the mayor decided to host the migrants in abandoned homes. Mostly the action took place in the streets and the children where invited to draw by throughing 7 km thin satin colourfull lines from the headquerter of Citta’ Futura through all the town ignoring all abstacles…

La Tenda/The Tent_al MAAM (at the MAAM Museo dell’altro e dell’altrove in Metropoliz, in Rome) is where I have chosen to install the visual coordinates of the Tent.

The MAAM  was born after a jurney on the moon of a community of people who could not find a place to live in this world, the extraterrestrials of Space Metropoliz by Giorgio de Finis

Metropoliz is a place with no residency, some streets still don’t have a name, or the names of the streets have been given by the inhabitants..it is a space that formally doesn’t exist or is not recognised..it is a temporary precarious space, even the football field that was build for the children, has lines that do not correspond to standards, because it is a patchwork of fragments that the community brought together…

(…) the rest still has to be translated